Whirlpool has been the forerunner in producing a refrigerator that meets and exceeds the Environmental Protection Agency’s (EPA) stringent energy efficiency demands. The EPA adopted the standards developed through the Montreal Protocol, which included participants from all the industrialized nations in the world in 1993. Whirlpool also won an industry wide award for coming up with the most efficient, safe and inexpensive cooling refrigerant substitute for the R-12 refrigerant widely used in the design of all domestic refrigerators for many decades, named R134-A. The R-12 refrigerant had been identified by some scientists as the product most responsible for global warming because of its supposed ozone depletion effects (this claim has been open to much speculation and debate over the years with the matter still unsettled in many circles). Whirlpool’s patented ice maker has served as the standard throughout the industry for many decades.

Whirlpool refrigerators began being produced with the new R134-A refrigerant across all their models and brands about ten years ago. The refrigerant has proven to be a very stable coolant product helping Whirlpool capture market share in all domestic refrigeration categories (side x side, bottom mount, top freezer and French door). Whirlpool also began using a modulating compressor in all of their refrigeration models allowing for the average annual energy costs to hover around $50! This is staggering when compared with refrigerators that are 20 years or older with an average annual operating cost of $200! $150 a year in energy savings goes a long way in paying for one of the new Whirlpool energy efficient refrigerators. When replacing their main refrigerator, many customers want to move the old refrigerator into the basement to use as a spare. The staff at Landers Appliance explains the cost benefits of buying a new inexpensive refrigerator as an alternative. The savings are too dramatic not to consider this option. 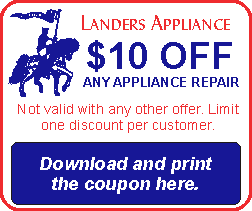 As with Whirlpools washers and dryers, their refrigerators provide a reliable, long lasting, low cost to maintain, easy to repair product. They offer a wide variety of sizes and styles including the popular French door design. In case you hadn’t picked up on this fact, Landers Appliance thinks highly of the Whirlpool Refrigerator.

For a history of Whirlpool go to Whirlpool’s website.

If you’re looking to see if we service your area, click here for a complete list of Maryland and Pennsylvania zip codes that we service.

Recall Information
You can find detailed information about recalls on any of the major household appliances sold and distributed in the United States on the U.S. Consumer Product Safety Commission’s website: http://www.cpsc.gov