How to Clean a Dryer the Right Way 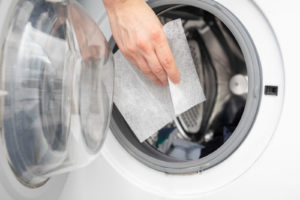 You can get the most out of your dryer by following these tips!

If something ever goes wrong with your clothes dryer, it might be more cost-effective to fix it rather than getting a replacement. While Landers Appliance is happy to diagnose and repair your major home appliances, we also recommend several simple ways of making sure you avoid breakdowns in the first place. When you clean a dryer the right way, you can ensure it will perform at its full power for longer.

The first step is to make cleaning the lint screen after every load a habit. The lint screen catches the extra fuzz, dirt, and dust that might leach from your clothing, towels, etc. When the lint screen is full, it becomes difficult for the machine to ventilate properly. In fact, a dirty lint screen is one of the most prevalent causes of dryer fires. It is sadly common but highly preventable at the same time. The best way to clean the lint tray is to either scrape the lint film off from both sides with your hand or dry tissue paper.

The lint trap is the portion in which the lint screen sits. It is good to sometimes clean this part, too, as lint can lodge in there and contribute to clogging. Remove the lint screen and vacuum the lint trap with a narrow nozzle. Wipe the lint trap down with warm, soapy water and let it dry completely. Wiping can help to remove residue built up from dryer sheets and fabric softeners. Don’t forget to replace the lint screen when you are finished.

Like the lint trap, the lint screen might also clog with chemical residues. In this case, it is best to remove the lint screen and wash it in very warm, soapy water, scrubbing it with a nylon brush or a spare toothbrush. Allow it to dry completely before replacing it.

Once a year or so, you can also benefit from cleaning the dryer drum as well. To remove residue, foul odors, and dirt, create a mild solution of white vinegar or baking powder or both with warm water and wipe down the drum with a microfiber cloth. Leave the door open so that it will dry out completely.

Lastly, unplug the dryer and remove the plastic cover from the dryer vent exit outside. Remove the piping connecting your dryer to the wall and use a rotary brush and vacuum to clean out both ends.