The History of the Refrigerator 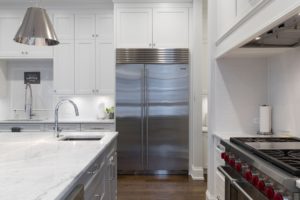 The refrigerator has seen many forms since its ancient beginnings.

Refrigeration is an invention that goes back to ancient times. We might enjoy refrigerators today as everyday appliances, with water dispensers, smart grocery lists, and classic adjustable shelves, but over the decades, it has seen vastly different forms. The history of the refrigerator is one of the ancient and modern marvels of life.

In ancient times, different civilizations would keep food fresh by one of two methods. One would be to cool the goods directly in a cold natural resource, such as a river, a stream, or the nighttime air of the desert.

The other method was to create a storehouse. One might dig a cellar into the side of a hill, dig a storage pit, or build an ice house. These cellars or pits would contain the food surrounded by ice or snow, which people would insulate with straw or sawdust. Refrigeration relied solely on natural cooling and insulating agents.

The Invention of Iceboxes

In the 1800s, people began to use ice boxes for refrigeration. These were wooden or metal chests lined with zinc or tin and insulating materials like sawdust, seaweed, and straw. A box in the chest would hold ice delivered regularly to the home and keep provisions cool.

The Move to Mechanization

Meanwhile, William Cullen discovered the cooling effect of rapidly heating a liquid into gas in 1748. Others marked his discovery, but he nor they put it into practical use. Throughout the early 1800s, numerous innovators created the basic form of the refrigerator as we know it today.

As early as 1802, Thomas Moore invented portable refrigeration and patented the term “refrigerator.” Jacob Perkins built the first working vapor-compression refrigerator in 1834, and by 1876, Carl von Linde patented the refrigeration process that Cullen had discovered over a century ago. Refrigeration became the healthier, more efficient option over ice boxes, and the demand for fresh food was growing as urbanization increased.

Innovations Throughout the Years

In the early 1900s, refrigerators were a luxury for the wealthy. The very first home refrigerator was invented by Fred W. Wolf in 1903, followed by others such as William C. Durant’s Frigidaire and General Electric’s Monitor Top. In this model, the compressor sat on top of the fridge.

It wasn’t until the 1930s that average American homes began to see more refrigerators. With the discovery of Freon as a safe refrigerant, Americans finally embraced the modern fridge in droves.