The History of the Microwave Oven 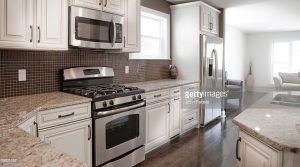 The history of the microwave oven reaches back to the early 1900s.

Early Use of the Microwave

Before microwave ovens came the discovery of the microwave. Bell Labs, General Electric, and RCA independently experimented with cooking food with radio waves in the early 1900s. However, no commercial cooking product developed during this time. Even in 1933, when Westinghouse demonstrated radio waves cooking steak and potatoes at the World’s Fair in Chicago, no real commercial cooking product emerged. Instead, attention turned toward the war and developing the magnetron tube, which could send out radio waves to detect distant enemy airplanes.

Development of the Microwave Oven

Raytheon had been manufacturing magnetron tubes for the army for years. One day, one of their engineers, Percy Spencer, discovered the first real form of the microwave oven by accident. As the story goes, Spencer felt a strange tingling in his body and noticed that the chocolate in his pocket had completely melted.

He created a box with a magnetron tube that would shoot the microwaves into it, and began popping corn kernels and cooking his lunch in it. He supposedly added a door to the box once an egg exploded in his colleague’s face.

Microwave Ovens Then to Now

Over the next few decades, Americans and other nationalities bought microwave ovens in droves, and by the end of the 1990s, about 90% of Americans had a microwave in their house. The fundamental technology remains the same, but one can now find them in different configurations, such as countertop, over-the-range, built-in, or under-the-counter. Should anything go wrong with yours, Landers Appliance is just a call away.